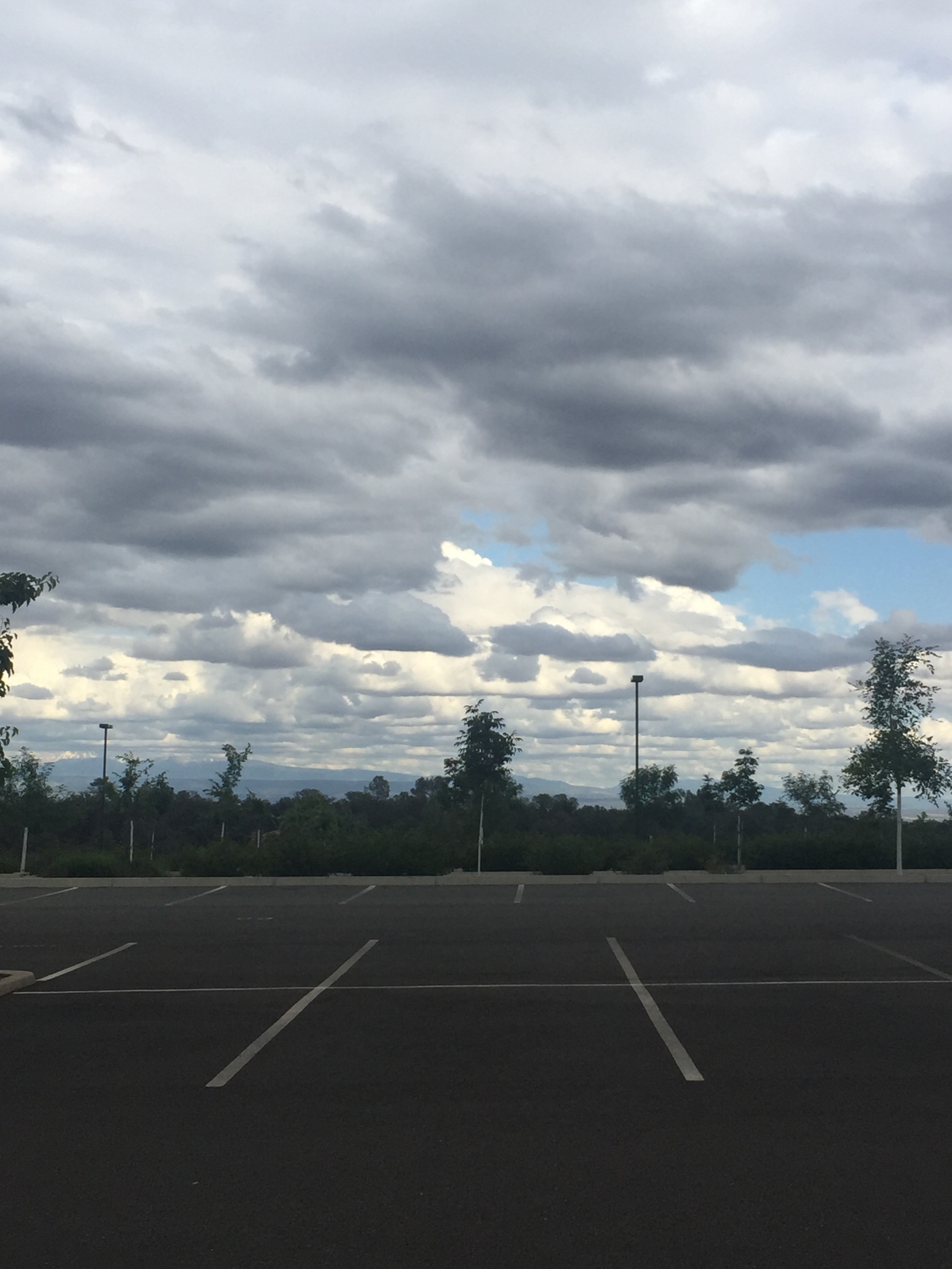 The fight between overcast and sunny was an aggressive one. The sun relentlessly pushed against the clouds fighting for the space to shine. The black pavement slowly began the rise to hot, my shoulders felt the few rays of sun that made their way in between the clouds. Hot pink ear buds roared music into my ears as my feet moved quickly upon the warming pavement.

I was finally alone. Isaac was at school, Charles at work. It was just me, music, and the battling cloudy sky and sun. I moved swiftly letting the music set my pace, mumbling out my worries, words just falling out, unconcerned with rational cohesive thoughts. As my rant came to an end, I heard it. A still small voice. It sounded much like my own but calmer. More rational. I turned the music down two notches. Again I heard it. Again two more notches.

“I want you to stay present.”

“What,” I responded this time.

“I want you to stay present.”

“You want me to stay present,” I asked, turning my music down to almost nothing.

“Yes. I want you to stay present,”

“What on earth does that mean,” I asked; the distaste for what that might mean apparent in my tone.

“I want you to sit in the moment. When you prepare for what you are going to say in an argument or conversation. Or you decide what a person will say or do,  and then decided what you will say in response. You are taking from the past and writing it into the future. You have already decided that the person before you is also the people behind you, and they will do what others did.”

“I have never thought of it like that before.”

“I know. It’s why you have continued to write people beside you into a story that is already behind you. You do not need to have all the answers for what is to come, you simply need to know who you are and be free to answer in the moment. You simply need to be present.”

My feet hadn’t stopped their quickened pace until that instant. Until his words began to sink in. Until I began to grasp that although my love for planning is a nature thing, a way that I am wired and it is good; I have used it all these years as a tool to defend myself. To make sure I always know what is coming, and be prepared for it.
My feet never quite picked up their quickened pace after that conversation, and there was little else said after those moments. It was just me and my thoughts, trailing off down a rabbit hole of revelation.

And as I have thought about it this is what I have come to.

There are a few places where it is good to be prepared, to know what to say. When you are giving a speech, when you are preaching a sermon, when you are presenting a paper. It is expected for you to know what to say. However, in the intimate things of relationship, nobody likes to be boxed. To be judge on the wrongs of others. Staying present, letting people tell you their story, it gives them the chance to write their story. To make their own decision of who they want to be in your life.

In Exodus 4 you can see even with Moses, as he spoke to Pharaoh, God asked him to stay present. Moses knew the Pharaoh’s heart would be hardened, that he would not relent yet he had to stand before him and ask him, over and over, as if he didn’t know. With each plague he offered an opportunity for Pharaoh to re-write the story.

Emotionally staying present gives us the chance to build our trust with the Lord. You see, if we keep re-writing the past into the future, we are spending our relationship with God asking him to change the same thing over and over. We don’t stop and give him the opportunity to show us something different.
For example, I have trusted few men in my life. I have met few men who deserved trust nor did they work to earn trust from me. Trusting men simply wasn’t a life experience I had much of. If you were a man in my life and I did trust you, I can guarantee you they worked really hard for that trust. Being transparent, it has been something that has bugged me about myself, yet I didn’t always know how to change it. Men are human, they make mistakes, but any mistake made by a man who was my friend, was pretty close to unforgivable to me. It automatically put them in this box, and I took their present mistakes and wrote them into past characters in my life. Today, as I have sat in this revelation, what I believe I am more empowered to do then ever before. Is let a present mistake be a mistake. It doesn’t write them into the past character’s of my life, but it makes them simply human. And I can talk to them about the mistake, and then give them the chance to handle it in the now. Surprisingly, not all men are untrustworthy and evil. They are simply human.

To stay present, is to trust God with your now. It’s not to say I hope the past doesn’t become my future, but it’s to say, I have a chance to see something new and I will see it. I will feel the now and let who is in my life presently share in my now.

When recovering from your to trip to Redding, always say yes to @erinecraig and a quick overnight in the North Carolina mountains. #fingloveher #lakelure #wineandsnacks
I snapped this picture the other day as we left the fertility clinic. Although he wasn’t feeling 100 percent he went with me for my second IUI, and he basically kept me laughing from the moment we walked into the office until we walked out. I didn’t know I was having the procedure until 11:00 that morning, it’s kind of how some of the fertility stuff rolls I am learning. It wasn’t lost on me that it was New Year’s Eve. That that time 5 years ago we were in the throws of letting go of Katie Grace. Yet it felt different, this whole New Years season has felt different. Normally I can feel grief making it’s way up from the depths of my heart , I practice my breaths and make a plan of action as to how I am going to embrace what is coming. It didn’t come this year, that grief from the depths. Instead there has been this steadiness, this peace, this understanding, a deeper level of okay. I don’t know if it has been simply time, if it’s been being in Charlotte, pouring ourselves into his family, building relationships and creating memories we once thought we would never have. I don’t know if it’s been saying yes, so intentionally to creating new life. If it’s been the letting go of KG on another level and that has ushered in this...this understanding...this deeper okay. I don’t know. I know I don’t have a deep resolve for 2020, I have nothing good or bad to say about 2019. I have no idea what life is going to hold, I have no idea where we are going to end up. I am not hopeful or hopeless, I am not excited or lack excitement. I am simply good. I am steady in who I am and who I am becoming. I see where I need to grow and see where I have grown. I am deeply wrapped in the love of the Father, whether I feel him near or not, I know always who He is and who I am to him. I love who I have in my life near and far. I am not entering 2020 with a plan or want or desire. I am entering it content. No striving for a better me, or a different me. I don’t have to plan for growth or stay woke, I have come to realized that is how I am created and I don’t need to strive for my natural design. I just need to welcome it. So welcome 2020....it’s going to be okay.
Wrote a blog this weekend...I felt rusty and it felt good. Link is in bio. #blogger #notreally #christiansandco
By far the largest baby in the NICU those nine years ago at 10 lbs 11 oz!! The nurses who became family for those 30 days would joke how wild it was to change her diaper because she was simply so big and they weren’t used to it. Grief is a wild ride, each moment handing you something different. The variety of emotions your heart feels is far beyond an emotional chart you find at a therapist office. This year I find myself settled in gratitude. Those were hard days, those first 30. Clueless, exhausted, emotional depleted, afraid, yet still having to the be the adult that makes the decisions, it was intense. As I look at this picture and remember those times....I find myself simply grateful to have had her. Grateful that I knew her. Held her. Comforted her. Snuggled her. Kissed her. Cared for her. I was her person, well next to her dad of course 😉, and my heart is forever grateful. #itsthattimeofyear #365daysofkg #timehopforthewinmaybe

Copyright © 2009 · All Rights Reserved · our highwayfive.com