While Katie Grace and I were at Sutter Hospital for our Sutter-staycation 2014 lung collapse, I saw a whole lot of this. 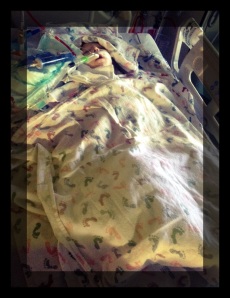 It went on for days. Machines beeping, air being pushed through her lungs, morphine every so many hours, antibiotics, seizure meds, position change, breathing treatments.  The schedule was relentless, consistent and at some point mundane.  There was little for me to do.  So I sat, prayed, built relationship with doctors and nurses. I kissed her face, held her hand, and I waited.

I thought I was waiting for her to heal her body….for that lung to open up so she could breathe easy and we could go home.  However on Mother’s day the Lord showed me another picture.

Isaac and I were having a quiet moment at the hotel we rented for the weekend so I could get some sleep.  I had a movie playing quietly for him and I sat in one of those autumn colored overstuffed looking chairs but it was really understuffed. The ones that are comfortable enough to sit in but not so comfortable you can fall asleep in them.   I laid my head back, closed my eyes and in a instant I saw before me the Lord and Katie Grace.  He was sitting in a chair much like mine but different.  Thinner on the edges and less cushion.  His body was long and lean and sitting on the very edge of the seat.  In his arms was Katie Grace, the porclein skin on her legs was peeking out over his, her red hair highlighted as it laid softly on his chest.  His face was buried deep into her hair, and her body leaned heavy into him.

They had been crying.  Their breathes matching each other with rhythm and weight.  As he breathed out his presence she breathed it in…like it was recharging her.  I just stood there, quiet and lost in their moment together.  I knew I could have run over there and entered into their breathes, and I also knew it was a gift from the Lord that I was invited in.

Then I heard him to speak her.

“They are going to be okay.”

Looking up innocently she said “I am going to miss them so much,”

“I know,” he tenderly replied. “We always knew it would come though.  You knew the journey was only for a time.,”

“But my heart Lord,”

“I know daughter.  Hold tight to me and let me show you again what my purposes are.”

Gently placing his hand upon her head, her pulled her deeper into him, although it didn’t seem that they could get any closer.  I knew he was showing her of what was to come.  Reminding her of who she is and what good he has for her life.  I knew she was seeing the story that she originally said yes to….reminding her spirit of what her body and soul fight for in the physical world.

Oh how I ached to see what she saw.  To see the story, to know the middle and the end.  Then the Lord looked up at me and without blinking his eyes he said:

“Her body slowed down so that she could come home and rest in my arms.  As time goes on, she will need more and more of these times with me.  They will get longer and before you know it, it will be in my arms that she stays.  Do not under estimate her love for you and her family.  Do not misunderstand her grieving process for even those who leave this earth grieve the ones they love. She is no different.”

And just like that the pictures above began to look different to me.

There is this story in the Bible about a servant named Gehzai.  Gehzai was a servant to Elisha a prophet in the Old Testament. (This is the short version)   In this story the King of Syria is warring against Israel and he told his men to go to the City of Dothan where Elisha was and to get him and bring him back to the Syrian camp.  When Gehzai wakes in the morning and looks out he see’s before him a whole troop of men and chariots surrounding the city. And he is afraid cause all he can see, is the physical realm.  Gehzai runs to Elisha and says “Alas, my master how shall we do?”  Elisha answers “Fear not: for they that be with us are more then they that be with them.”  Then Elisha prayed ” Lord, I pray thee, open his eyes, that he may see.” The Lord opened Gehzai eyes and he saw “the mountain was full of horses and chariots of fire round about Elisha.”

And just like that the picture Gehzai had before him look different to him.

Things are not always as we see them.  I thought I was waiting for Katie Grace’s body to heal and Gehzai thought they were outnumbered.  I wasn’t though and neither was Gehzai.  The real picture of what was happening we something we can not see with our physical eyes until our spiritual eyes are open.  Katie Grace wasn’t broken or a victim of her body.  Actually her body was so strong it could handle the intensity of her hospital stay. The treatments and medicine that they were using don’t come without a cost to her body.  With medicine every healing comes with a price.  Her body is so strong it could handle the price so that her spirit could be saturated.  She sat in her Father’s arms for 162 odds hours, hearing of who she is and what she brings to this life.  She was reminded of her destiny, her identity, and the atmosphere she brings to the world.  She wasn’t a helpless child but a powerful world changer, breathing in the presence of her heavenly Father.

People with special needs are not broken or a victims of their bodies.  They are powerful people whose presence change the lives of those around them.  They open doors to things of the spirit that other wise we would miss.  We would miss because we wouldn’t know to ask.  We wouldn’t seek to see what they see, or know what they know.  I sit on the lap of my Heavenly Father when I pray but he does not show me the beginning and the end. I do not know my whole purpose through and through. I know things, and tid-bits and hints of things.  I do not get the full movie though.  My daughter gets the full movie.  That knowledge changes the atmosphere that she is in.  It changes it without words. She doesn’t have to lay hands on people, pray in tongues, or intercede.  She just has to breathe.  Her breathe is our invitation into her destiny.  Into her calling.  Into deeper parts of the Lord.

I don’t know about you but I don’t want to miss that. I don’t want to miss the invitation. I want to be someone who see’s and knows the deeper parts of the Lord.  I want to see special need’s people for who they are….for their destiny….for their purpose.  I want to see our nation do the same.  What if we stopped looking at them as broken or less then. What if we understand the language that they speak.  What if we looked at them and saw purpose and destiny. What if we saw deeper parts of the Lord in their eyes and hearts.  Special needs people are not going to be “normal”…..they didn’t come that way….and our society is better for it.

If we let it.  If we stopped being afraid. Stopped looking with our physical eyes.

After Katie Grace woke up from the morphine induced sleep she spent the first hour doing this: 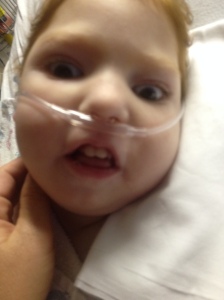 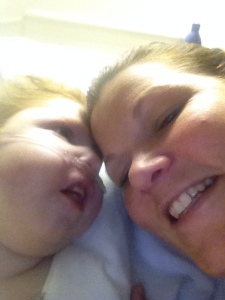 That isn’t the face of a broken body but a powerful daughter who brings fearlessness to the world.  That my friends, is a part of Jesus here on earth.

2 thoughts on “Things are not always as they seem”

Snapped this while the manchild👨 and I strolled Clover 🍀 Creek the other night. We both decided it needs to become a habit.
The last two months have been some of the most interesting days. Pretty sure they are a whole story that is not ready to be written.
1st Baseman at work! #christiansandco #isaacadam #dustsdevils2021
Been a long time since I laughed that hard while shopping! #targetwasntreadyforus #lifewiththeLaRos #christiansandco

Copyright © 2009 · All Rights Reserved · our highwayfive.com